Today, Grand Army Blog followers have the privilege of reading a guest post written by my wife, Allison, a public historian who specializes in the Civil War era.  Allison is currently a park ranger at the Weir Farm National Historic Site in Wilton, Connecticut, the only unit in the National Park Service system devoted to American painting.  Weir Farm was the home and studio of Julian Alden Weir, a noted nineteenth century American impressionist.  Over the past year, Allison has spent a good deal of time researching the Weir family’s connections to the Civil War.  She has uncovered some rich findings underlining just how deeply our fratricidal conflict touched “every heart and hearthstone” across the land.  Allison presents here the heartrending postwar tale of Julian Weir’s half-brother, an ex-artillerist hopelessly haunted by Gettysburg.  For those of you in Connecticut or the greater New York City area, Allison will be presenting a lecture, “A Brush With War: The Weir Family in the Civil War,” at Weir Farm NHS on Sunday, April 15, 2012, at 2:00pm.  All are invited to attend what promises to be a fascinating program.

Shortly after dinner on July 18, 1886, Captain Gulian Verplanck Weir hurried upstairs to his bedroom in the officers’ quarters at Fort Hamilton, New York. The 48 year-old husband and father of six young children had just returned from a week’s duty at Creedmoor, and by all accounts had been in “bright and cheerful” spirits that day. Weir undressed, sat down in a nearby chair, and positioned the barrel of a .45 Springfield rifle directly over his heart. “Five minutes later,” the U.S. Army & Navy Journal reported, “the family below [was] startled” by the piercing sound of a single gunshot. “They rushed up[stairs] and found the captain groaning and gasping,” the report continued, “blood streaming from a wound in his breast.” Within a matter of minutes, he succumbed to the self-inflicted wound. He had used his right toe to pull the trigger.

In the days that followed, Fort Hamilton and the surrounding community contemplated the impetus for Weir’s decision to take his own life. The coroner’s jury determined Weir had suffered “a fit of mental aberration,” while the New York Times deemed Weir “temporarily deranged.” Some pointed to a severe case of bronchitis that had plagued Weir throughout much of 1885, and still others hypothesized that the “only cause that could be assigned for the rash deed was pecuniary,” citing his captain’s pay as insufficient to support a large family of eight. But Weir’s comrade Colonel John Hamilton believed simply that “there could be no other cause for his terrible deed than temporary insanity.” 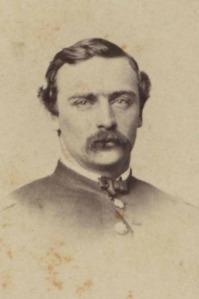 Captain Gulian Verplanck Weir had been born and raised at West Point, the son of     the U.S. Military Academy’s Professor of Drawing and renowned artist, Robert Walter Weir. A graduate of West Point, Gulian enlisted in the 7th New York State Militia (a 30 days unit) only days after the firing on Fort Sumter in April 1861. The unit was sent south to assist in the construction of some of the defenses of Washington, and, upon his muster out in June, Weir re-enlisted in the 5th U.S. Artillery as a 2nd lieutenant.  He earned brevets for conspicuous gallantry during the Peninsula Campaign and again at the December 1862 battle of Fredericksburg.

By July 1863, Lieutenant Weir had assumed command of Battery C of the 5th U.S. Artillery.  On the second day of the battle of Gettysburg, he unlimbered his guns near the Emmittsburg Road, not far from the Codori Farm. After expending all the ammunition in his caissons against the onslaught of Richard H. Anderson’s rebel division, Weir’s battery “immediately limbered up,” hoping that the federal infantry regiments to his rear would be able to drive the Confederates back. But “the enemy was too close.” Battery C was trampled. Three of Weir’s six guns fell into Confederate hands. In his after action report, Gulian Weir emphasized the confusion of the moment, noting that his horse had been shot out from under him.  Upon rising from the ground, he was struck “with a spent ball, and everything seemed to be very much confused.” Amidst the chaos, Weir, acting on his own volition and without orders, dispatched the remainder of his battery to withdraw to the rear.

While he would serve with the 5th U.S. Artillery for the remainder of the war, eventually transferring to Battery L to fight throughout the Shenandoah Valley, the loss of his three guns at Gettysburg continued to vex and taunt Gulian V. Weir. Faced with repeated accusations of cowardice on the battlefield over the abandonment of the guns, Weir maintained a heated correspondence with his superiors, including II Corps commander Winfield Scott Hancock, after the war.  (Three of these angst- ridden letters are included in the Batchelder Papers). Though the artillery pieces were later recovered, Weir never forgave himself for the loss and could never overcome the charge of fear. Tortured for nearly two decades, it was an 1885 visit to the Gettysburg battlefield that sealed Weir’s fate. After touring the fields and once again walking in the footsteps of Battery C, Weir wrote that he had returned home a “broken man,” and that the memories of July 2 had come flooding back vividly.  Indeed, in the months prior to his death, his fellow officers found him “noticeably depressed,” as well as “moody” and “discouraged.” While Weir’s terse suicide note left no explicit indication of his reasoning for suicide, perhaps we do not need one. The horrific memories of Gettysburg had so remorselessly stalked Weir that one July evening, he was convinced that the only way to escape them was with a bullet.

9 thoughts on “Haunted By Gettysburg”