Check out this Blog Talk Radio interview about the ongoing efforts to restore the Charles Sumner Post No. 25 GAR Hall in Kent County, Maryland.  The Sumner Post was an all-black post and African-American veterans constructed the building, which was completed in 1908.  Only one other GAR Hall erected by black veterans remains standing.

Last year, Barbara Gannon gave us a fine treatment of African-Americans in the Grand Army of the Republic, the nation’s first truly interracial fraternal organization.  Gannon insists that interracial bonds of comradeship, forged at places like Ft. Wagner and Olustee, survived the war intact.  I highly recommend her book, The Won Cause, which not only received a richly deserved Honorable Mention for the 2012 Lincoln Prize, but was a finalist for the Museum of the Confederacy’s Jefferson Davis Award.   Barb’s book is one more in a growing list of titles challenging the “road to reunion” thesis.

This past weekend, I presented a paper about the lives of Union veterans at Drew University.  My friend Justin Causey, a fellow Gettysburg College graduate who is working on his Ph.D. with historian C. Wyatt Evans, planned the event, which was organized around the theme of “The Future of Civil War History.” Joining me on a panel about reimagining the boundaries of the Civil War metanarrative were friends and colleagues Evan Rothera of the Richards Center at Penn State and Matthew Norman, a professor of history at the University of Cincinnati. 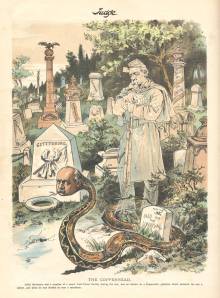 After our panel, the audience posed great questions.  One audience member asked a question that has been troubling me for quite some time.  If Union veterans were routinely marginalized and dismissed by postwar society, what, then, explains the effectiveness of the “bloody shirt” politics of the late 1860s and 1870s?  I do not yet have a convincing answer for this question.  Perhaps northern civilians were simply all too capable of separating a lingering disdain for what they perceived as a treasonous rebellion from any sustained effort to grapple with the horrific consequences of the war.  Or perhaps “waving the bloody shirt” was simply crass political opportunism, intended to sway the votes of veterans themselves, the most significant voting bloc in postwar America.  There is, of course, no shortage of scholars ready to point out the superficiality of bloody shirt rhetoric after the Civil War.  Indeed, one distinction I hope to draw in my dissertation is the difference between “waving the bloody shirt” and living with a bloody shirt.  For the many who fell into the latter category, the charged political rhetoric of the postwar period was no doubt just that – rhetoric.

Again, I am not really satisfied with any of these answers.  What do you think?

In the last decade, the memory “boom” has captivated Civil War scholars.  This work, however, too often intimates that sparring over the meaning of the war occurred in a dominion of competing images, cultural representations, and metaphors.  But for the war’s blue-coated survivors, memory was lived experience – an experience they could never forget, and one that northern civilians were helpless to understand.

One of the principal goals of When Billy Came Marching Home is to reorient the history of Civil War remembrance along a veteran-civilian axis.  The categories fashioned by the historian David Blight to sort competing memories of our fratricidal war – what he called the “emancipationist,” “reconciliationist,” and “white supremacist” visions – were useful in explaining how the national narrative of the Civil War was segregated, but stopped well short of explaining how that same story was, from almost the very beginning, sanitized. The sanitization of the Civil War narrative, much like its segregation, has a troubling history.

It begins with the indifference and incredulity displayed by so many northern civilians in the immediate aftermath of the war.  In 1867, for example, several one-armed soldiers who scraped out a living begging for spare change in New London, Connecticut, were ordered to vacate the city by Mayor Frederick Allen.  Similarly, civilians in New York City groused about “veteran impoliteness” when confronted by panhandling ex-soldiers.  In an impassioned speech on Boston Common, noted temperance advocate J.B. Merwin lamented that veterans were compelled to seek companionship and sympathy in saloons and grogshops.

We know too little about these confrontations and how they persisted into the late nineteenth century.   Understanding these intra-sectional clashes may help clarify that Union veterans rarely ambled willingly down the road to reunion – and that the real force behind reconciliation was a civilian one with important consequences for blue-coated ex-soldiers and their legacies.